Are authors special? Not anymore than anyone else. They are normal people with hopes and fears and joys and heartaches. However, because of their art they are often put in a position of influence. We love certain authors because of the words they created, the stories they shared, the difference they made in our lives.

I have authors that have changed my life. I look up to them. I’m grateful for them and will forever hold a special place in my heart for them.

Whenever someone is in a position of influence they have a choice how they’ll use that. Some stand on a pedestal and puff themselves up. Others use their voice to lift others.

One author touched my life is Michael Bond. In fact, you could say i have a lasting bond with Michael Bond (pun intended). My son celebrated his fourth birthday the summer of 2015. He wanted a Paddington birthday party. It was magical (everything with four year olds is). Two weeks later we almost lost him to an adrenal crisis (which led to a diagnosis of Adrenoleukodystrophy). He was still very obsessed with Paddington at the time. I remember curling up with my sick boy and reading him Paddington. In his arms was the new Paddington bear from his birthday. I was so grateful for the man that created this character that had brought such joy to my son that I emailed him through his website and thanked him.

Whoever it was that read his emails sent a quick note back asking for my address and a few weeks later a signed copy of Paddington came in the mail. Michael Bond was old at the time and died less than two years later. I don’t know him personally but his life has touched mine. He used his influence for good. Whoever we can influence with our talents and time let it be for good. A little thing like a signed book might be the thing that offers a ray of light to a family going through a storm. Little things are big things.

And yes I plan to see the Paddington movie that comes out this week. And yes even though it’s a comedy I’ll probably cry!

What authors have touched your lives? 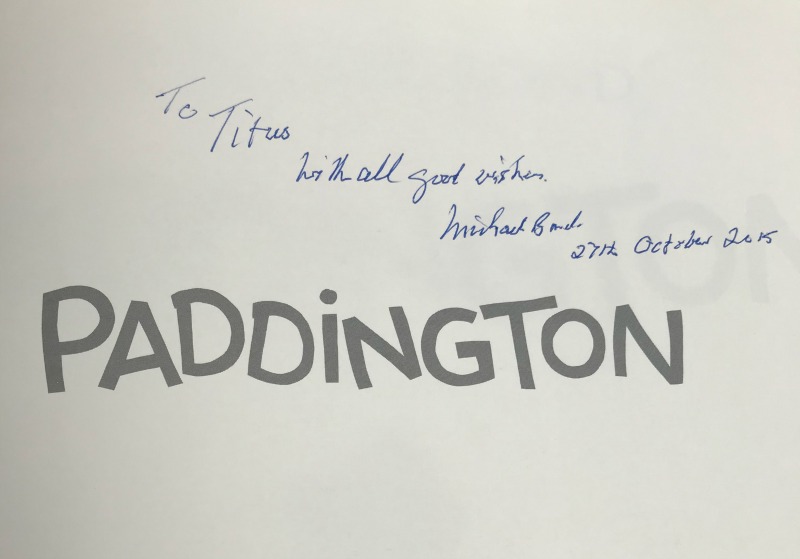 2 thoughts on “A Lasting Bond”